Policy performance bonds are a simple, and somewhat subversive, idea that yet might encourage governments to deliver on their policies. In the case of carbon emissions reduction targets, for example, a policy performance bond (also called index-linked carbon bond) is a government issued bond where, in its simplest form, interest payments are linked to the actual greenhouse gas emissions of the issuing country against published targets. An investor in this bond receives an excess return if the issuing country’s emissions are above the government’s published target.

A policy performance bond thus provides a hedge against the issuing country’s government not delivering on its commitments or targets. Policy performance bonds can be issued against carbon emissions reduction targets but also forest preservation targets and any other area where policy risk is significant. In the case of index-linked carbon bonds, the ability to hedge enables the same investor to invest more confidently in projects or technologies that pay off in a low-carbon future because if the low-carbon future fails to arrive the government too bears direct costs of having to pay higher interest rates on government debt. Index-linked carbon bonds eliminate the one risk that differentiates clean tech projects from other energy projects, the uncertainty of government policy actually being directed at a low carbon future. Examples of potential indices that address this unique risk are:

The same idea can be used for index-linked forestry bonds on forestry cover, etc. Since first mooted by Long Finance in 2008 & 2009, the private sector began issuing these bonds, tying interest rates inversely to performance against the achievement of environmental, social, or governance goals (our touchstone, as opposed to saying the proceeds will be used for ESG purposes), in 2017. The terms "sustainability-linked finance" or "positive incentive loan" are sometimes used:

So, which government will be prepared to put money where its policy mouths are? 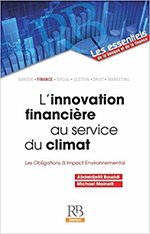