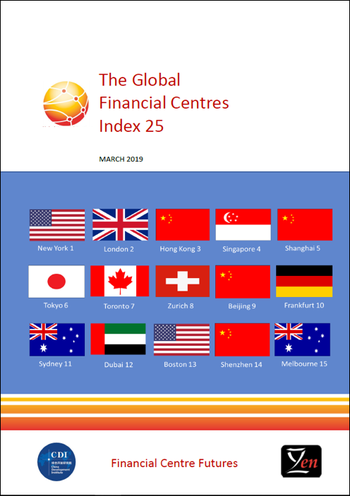 Paying For Energy Savings In Schools

Uses & Abuses Of Discount Rates A Primer For The Wary

March 2019 sees publication of the twenty-fifth edition of the Global Financial Centres Index (GFCI 25). GFCI 25 provides evaluations of future competitiveness and rankings for 112 major financial centres around the world. The GFCI serves as a valuable reference for policy and investment decision-makers.

112 financial centres were researched for GFCI 25 of which 102 are now in the main index. The GFCI is compiled using 133 instrumental factors. These quantitative measures are provided by third parties including the World Bank, the Economist Intelligence Unit, the OECD and the United Nations.

The instrumental factors are combined with financial centre assessments provided by respondents to the GFCI online questionnaire. GFCI 25 uses 29,065 assessments from 2,373 respondents.

The Headlines Of GFCI 25 Include:

Leading Centres; New York remains in first place in the index, just seven points head of London. Hong Kong is only four points behind London in third and Singapore remains in fourth place; Shanghai remains ahead of Tokyo in fifth place in the index although Tokyo gained ten points in the ratings; Toronto rose 27 points and gained four places to seventh. Zurich, Beijing, and Frankfurt remained in the top ten.

Western Europe; This region did well after a mixed performance in GFCI 24. Thirteen of the top 15 Western European centres rose in the ratings with particularly strong performances by Monaco, Madrid and Edinburgh. Only Luxembourg and Amsterdam saw modest declines; The centres that are most likely to benefit from Brexit did well, with Zurich, Frankfurt, Paris, and Dublin all gaining ground. Amsterdam was the only centre in Western Europe that dropped more than ten points in the ratings.

North America; North American centres also did well in GFCI 25 with most centres rising in the ratings. Of particular note is the performance of Toronto, Montreal and Vancouver, the three leading Canadian centres. All three showed strong increases in the ratings. Toronto rose four places to seventh overall and Montreal is now in 18th place; Washington DC regained the ground that it lost in GFCI 24 with a rise of 34 points. This rise resulted in it climbing four places to 32nd overall.

Eastern Europe & Central Asia; There were significant gains for Astana, Istanbul and Prague. Astana only officially launched its financial centre in 2018, and it is unusual for such a new centre to perform so strongly; Tallinn made a lot of ground in GFCI 24 but fell back this time despite a growing reputation as a strong FinTech centre.

Middle East & Africa; Dubai, Casablanca, and Abu Dhabi continued to rise in the index. Doha lost some of the ground it made in GFCI 24; Kuwait City and Nairobi were new entrants to the index, with Kuwait ranking 57th in its first entry.

Latin America & The Caribbean; There were mixed results in the region with five centres rising in the ranks and three declining. The Cayman Islands, Panama, and Bermuda performed strongly.

Island Centres; The British Crown dependencies showed a mixed performance with Jersey making a small gain, the Isle of Man moving up but Guernsey dropping 15 places in the index to 75th place.