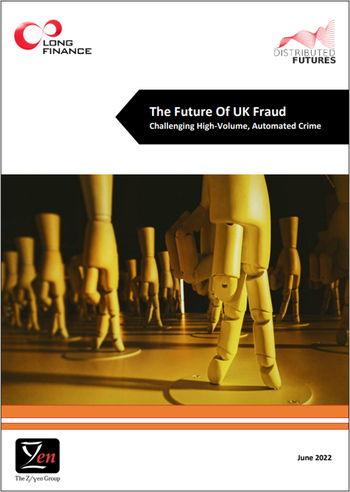 This study focuses primarily on fraud as it affects individuals and consumers, i.e., large-scale, high-volume, automated fraud, where technology can make a difference. The time horizon is roughly a decade ahead. The output of this study provides four scenarios for readers taking a considered, forward-looking perspective on threats and opportunities.

The methodology included open-source desk research leading to the identification of a set of trends. Four scenarios were created and tested against the trends, against Dator’s scenario classifications, and against Adams’ risk/reward typologies. Five ‘future narratives’ were compiled and contrasted with the scenarios. The trends, scenarios and narratives were used to elicit feedback in a questionnaire and an online webclave. A viable systems approach was used to model two systems, the criminal system and the anti-fraud authority system, and then used to identify explorations for tackling fraud over the next ten years. These explorations, along with the scenarios, were used to set out a handful of ‘challenge’ themes as suggestions to guide the anti-fraud agenda over the next decade.