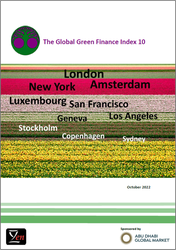 The tenth edition of the Global Green Finance Index (GGFI 10) was published on 27 October 2022. GGFI 10 provides evaluations of the green finance offerings of 84 major financial centres around the world. The GGFI serves as a valuable reference into the development of green finance for policy and investment decision-makers and is sponsored by Abu Dhabi Global Market.

As ESG analytics and other aspects of green finance penetrate mainstream financial activity, there is growing confidence in the development of green finance across all regions. There is, however, criticism of ESG as a mechanism, with commentary focusing on complexity, cost, greenwashing, and its low impact on carbon emissions. There is growing interest in carbon pricing and trading as a mechanism to address the central issue of greenhouse gas emissions and it may be that carbon pricing, alongside improved ESG systems, will be the way forward.

Looking at the centres which perform well in the GGFI, they are generally places that commit to environmental improvements across the economy as well as in finance. A key part of this performance relates to skills in the economy. Centres such as London, Amsterdam, and New York have a depth of skills in green finance, but also in other aspects of sustainable economic development.

Among those responding to the GGFI survey, Policy & Regulatory Frameworks continue to be identified as the leading driver in the development of green finance, underlining the reliance of green finance on robust and stable policy frameworks, which require government and regulatory action. Other leading drivers were Risk Management Frameworks, International Initiatives, and Academic Research around climate change.

As anticipated in the last edition of the GGFI, the invasion of Ukraine by the Russian Federation has led to a reduction in Moscow’s position in the index. In addition, the economic shock that has arisen from the war, has slowed down the transition away from fossil fuels in the short-term, although it may lead to increased investment in renewable energy.

In the supplement to this edition of the GGFI, we focus on agriculture, which is critical to the achievement of the sustainable development goals and faces challenges from climate change, political instability, and population growth. In the supplement, we consider the role different types of finance can play in supporting agricultural development.