The Smart Centres Index (SCI) was developed as part of our Distributed Futures programme and is an initiative to track the development of technology and financial centres across the world in their support for and readiness for new technology applications. It aims to help investors, governments, and regulators track the attractiveness of technology centres for new technologies and products by measuring how attuned centres and their regulatory systems are to attracting innovation and growth in Science, Technology, Energy Systems, Machine Learning, Distributed Ledgers, and Fintech. 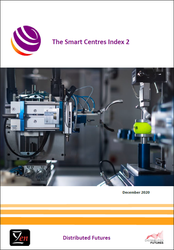 The second edition of the Smart Centres Index (SCI 2) was published on 22 December 2020. SCI 2 rates the innovation and technology offerings of leading commercial and financial centres across the world.

131 commercial and financial centres were researched for SCI 1 of which 51 are included in the index. SCI 2 was compiled using 126 instrumental factors. These quantitative measures are provided by third parties including the World Bank, The Economist Intelligence Unit, the OECD, and the United Nations.

The instrumental factors are combined with financial centre assessments provided by respondents to the GFCI online questionnaire. SCI 1 uses 1,508 assessments from 220 respondents.

All top 10 centres in SCI 2 are in countries with a high performing university sector across the fields of Engineering & Technology, and Mathematics, each having multiple universities rated in the top 20 worldwide in these subjects. A strong research and teaching base is important in building a technology and innovation culture.

An interesting point in the results is the high ratings of Oxford and Cambridge in the UK, which may highlight the importance of clustering, with these cities along with London forming a close network of academic and business development.