Building Bit, Breaking Bit - What's A Poor Government To Do About AltCoins?

Money may be viewed as a technology used to trade debts. Cryptocurrencies, such as Bitcoin, are digital technologies for debt exchange that rely on cryptography and decentralised peer-to-peer networking. Cryptocurrency technology is open and thus already cloned and altered. There are now over 50 identifiable alternative cryptocurrencies, aka “AltCoins”, such as IxCoin, Ripple, LiteCoin, Dogecoin, Primecoin, or Riecoin. AltCoin technology can manufacture new monies potentially stronger than national fiat currencies. Some see this technology as subversive or bad, some look ahead to other trust-trade applications, for example transferable votes among citizens or shareholders, or secure international property transfer. 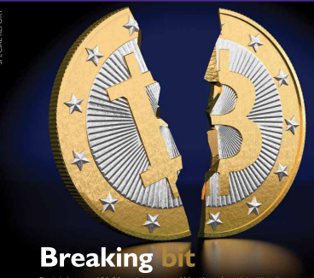 Bitcoin’s essential cryptocurrency innovation was a public blockchain. A public blockchain eliminates the need for a central counterparty to trade debt by having the entire network become the the registry of transparent transactions. ‘Trust’ in a central counterparty changes to ‘trust’ in the technology. From several possible choices of currency architecture, Bitcoin chose to set a maximum fixed supply of 21 million coins. This fixed supply means that Bitcoin is possibly best compared with mining and extraction of precious metals, particularly gold. Gold has a fixed earthly supply but is mined according to price and demand. Imagine Bitcoin as a virtual element. However, it is not money. Only a community can decide whether to use an element for trading debts. So far, many of the allegations for or against AltCoins focus on what type of community is perceived to be using it to trade debts – a Silk Road of Breaking Bad transactions, quixotic libertarians damning profligate governments, new age gold bugs, or hard-pressed traders in a tight credit environment.

New platforms, such as the Ethereum programming language and platform, are making AltCoins ever easier to issue. Newer AltCoins have variable denominations, faster transaction confirmation, higher security, wider trust validation, or innovative ways of making the money supply match trade velocity. Some AltCoins are targeted at specific communities, such as mathematicians. Some AltCoins attempt to provide ‘backing’, i.e. guarantees to exchange the cryptocurrency for gold, another commodity, or fiat currency. And AltCoins have launched into orbit. Last year, Travelex announced Quids, Quasi Universal Intergalactic Denominations, a space currency.

Many dismiss cryptocurrencies out of hand, looking at the inflated failure of Beenz, online virtual credits, from the dot.com bubble. However, it’s easy to forget that in times of economic turmoil, reduced trust in banking institutions, and tight credit, alternative currencies flourish. In the USA in the 1930’s, several hundred currencies sprang up to fill credit gaps. The eighty year old Swiss WIR is a government-sanctioned trade currency providing useful credit to a quarter of Swiss businesses counter-cyclically to the Swiss Franc. Bitcoin may fail, but it is already economically important. The five year old Bitcoin has a market capitalisation today of several billion dollars, albeit fluctuating wildly, about the same market capitalisation as the two century old London Stock Exchange Group. Bitcoin and other AltCoins may fail for any number of reasons, but some AltCoins are likely to succeed.

Fiat, ‘let there be’, currency is an artefact created by national or federal governments. Fiat currency consists of tokens that allow us to extinguish tax debts. We trade those tokens freely in a geographic region where we are likely to meet people under the same tax system. Fiat currency’s value lies in its ability to cancel tax debts. Governments ‘back’ their currencies through their monopoly of force on tax payment, creating a semi-coerced community of taxpayers. Governments create and destroy fiat currencies at will through borrowing and taxation. By managing the level of tax debts in the economy, both up and down, governments create credit that facilitates trade and exchange.

Most governments have been at best neutral or slightly unwelcoming to AltCoins. The States of Alderney, exceptionally among governments, have welcomed the idea of bringing out a physical Bitcoin in the form of a Commemorative Coin, in association with the Royal Mint. China has banned the use of Bitcoins. Others have given contradictory tax signals. Governments struggle with whether to class Bitcoin as a meaningless token, a trade token, a weightless commodity, or a currency. Classification is important for matters as diverse as corporate and personal taxation, value added taxation, financial regulation, formulation of monetary policy, and statistics. Current regulatory frameworks can handle AltCoins. It is equally likely that different regulators will make different decisions, e.g. as is already happening on value-added and sales tax treatments of AltCoins. More standards on managing AltCoin systems should emerge and help set performance standards, e.g. governance, reporting, custody, and exchange systems.

Governments are, rightly, concerned with facilitating illegal trade, crime, and tax evasion. Most are also concerned that AltCoins will weaken their fiat currencies. Meanwhile, theorists are divided on whether competition in currencies is good or bad. At one extreme, total proliferation, everyone could issue their own currency or several currencies. At the other extreme, total consolidation, there would be a global currency. Transaction costs and ‘backing’ become important as currencies proliferate. As the number of currencies shrinks the ability to match tokens to economic activity becomes more important to control wild currency inflation or deflation. Fiat currencies are closely tied to government taxation. This tie is starkly illustrated by the Euro’s problems, which partially stem from trying to incorporate multiple national taxation systems across diverse regional economies within one currency. The United States has equally had difficulties incorporating state taxation systems and a set of diverse regional economies. In a paper for the Cato Institute pushing for more competition in currency and private banknotes, Hogan states – “For almost a century, the Federal Reserve and central banks around the world have inflated away the values of their currencies without achieving noticeable improvements in economic stability or performance.”

By reducing markedly the cost of the technology and transactions, and doing away with the need for a central bank, AltCoin technology moves applications of money towards proliferation. Historically, alternative currencies have little effect on fiat currencies. The Bundesbank believes that alternative currencies may have the potential to harm, but are too small to matter. Smaller regional or local currencies, such as the Chiemgauer or BerkShares, seem to help their local economies without harming the national currency. The Swiss have evaluated their WIR over decades and come to the conclusion that a competing national trade currency is a significant help in counter-balancing the national fiat currency.

What’s A Poor Government To Do?

The technology of AltCoins extends beyond money to wider exchange by putting trust in technology over traditional intermediaries, including governments. Quite a leap of faith, but as people use AltCoin technology more, they will question traditional fiat currency more, and in turn the role of government. We believe that governments need to re-examine their monopolies on the issuance of fiat currencies, not with a view to abolition, but with a desire to use this new monetary technology for their own benefit.

“All history contradicts the belief that governments have given us a safer money than we would have had without their claiming an exclusive right to issue it.”
Friedrich A Hayek, “Choice In Currency: A Way To Stop Inflation” (1976).