Following the establishment of the Bretton Woods Agreement in 1944, the US dollar has dominated global trade and financial markets since World War II. The relatively recently (1999) established Euro comes second. 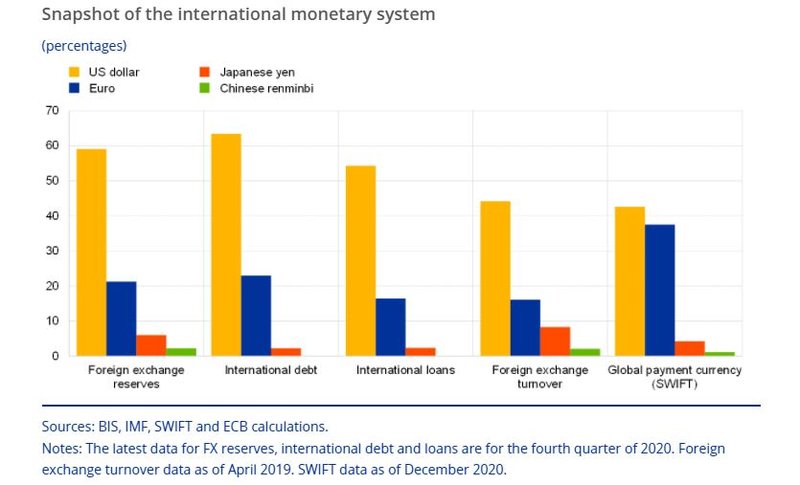 For many years, the dollar has been the standard currency used in world trade e.g. oil, gold and most commodities are quoted in dollars. Many countries hold their reserves in dollars principally in the form of US Treasury Securities. De-dollarisation describes a move away from this world order to one where nations sell their US Treasuries to hold reserves in other currencies or gold. Simultaneously they seek to use their own currencies for transactions between their most important trade partners. While the US dollar is likely to play a central role for some time to come structural trends are starting to decrease its importance. This chart gives a broad view of the importance of the US Dollar: 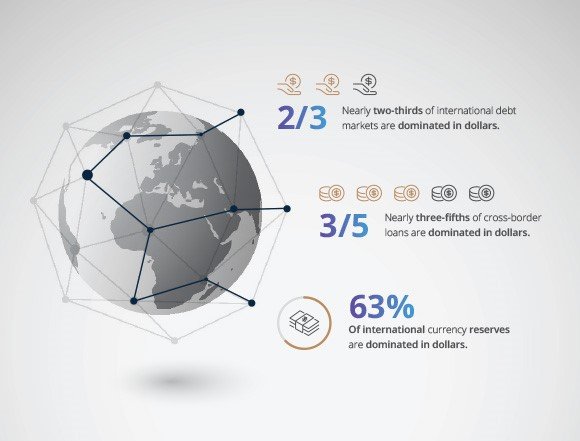 De-Dollarisation Is Not A New Phenomenon

De-dollarisation is not a new phenomenon but is a complex policy. De-dollarisation requires a number of carefully calibrated economic, legislative, regulatory, fiscal and political implementation measures for success. The moves towards de-dollarisation in Chile and Israel illustrate the complexities.

Chile’s experience is centred towards the introduction of indexed instruments to attract investors’ interest to the detriment of dollar-denominated assets. Most instruments were indexed to the consumer price index (CPI) through the creation of a unit of account the ‘Unidad de Fomento’ (‘UFs’).

The success of these instruments can be explained in terms of the credibility of the UF. Chile was confident that it would not suffer from a sudden loss of value, but more importantly, it understood that indexation in itself is not a complete solution: Indexation has to be accompanied by the development of secondary financial markets for these instruments, strong legal support for the indexation unit and common indexation measures. Institutional investors in the form of pension funds and insurance companies with regulatory encouragement had to invest a large share of their portfolio in local instruments.

Finally, monetary policy had to focus on price stability through inflation targeting. That policy was demonstrated by a clear mandate on the reduction of inflation. The package of policies reduced investors’ uncertainty and macroeconomic volatility

Israel is another successful experience of dollarisation. No direct attempt to de-dollarize the economy has been enacted, but since the 1990s an active policy was conducted in this direction when deciding on the currency composition of public sector issuance in a conscious effort to deepen the market for local currency denominated government bonds.

The cost has been higher interest payments paid by the public sector particularly in a period of high real interest rates. However, the costs have been reduced year after year as the disinflation programme did achieve success, and inflation finally reached single digits.

The Central Bank has played a very active role in promoting markets in financial derivatives and other instruments, to insure against exchange rate risk. The Bank of Israel was probably the first emerging country to have introduced inflation targeting, which, as with Chile, anchors expectations and reduce investors’ uncertainty of local currency assets.

Trade sanctions are being used more widely as an extension of international reach to achieve ends that complement or replace military efforts.

In the 21st Century, trade sanctions have been used well beyond substitutes for Military action. it is important to note that the process of de-dollarisation has gained even greater momentum with the onset of the trade war between the United States and China. The Trump Presidency used them against allied nations to protect the USA‘s own economy, as well as bargaining chips in trade negotiations.

The EU has done the same and has indicated that it would take such measures to enforce the Brexit agreement. Such actions or the threats of such actions spur bi-national agreements and trade in national currencies.

In the last decade:

Reducing The Effect And Exposure To US Economic And Monetary Policy

China and Russia have sought to reduce their use of the U.S. dollar, or ‘de-dollarize’ their economies, in an effort to shield their economies from U.S. sanctions, reduce exposure to the effects of U.S. economic and monetary policy, and assert their brand of global economic leadership. The US dollar currently has enormous power to infect the global economy with US inflation and the impact of US interest rate rises, both of which are managed primarily for US domestic purposes.

In 2021, China’s central bank, the People’s Bank of China (PBOC), announced a joint venture (‘JV’) with the Belgium-based financial messaging service, the Society for Worldwide Interbank Financial Telecommunications (SWIFT). SWIFT is relied on globally to send messages that facilitate cross-border financial transactions. The JV plans to create a data centre with a localised network in China that connects to the main SWIFT network. The facility allows the Chinese government to monitor and control cross-border payments.

China’s current de-dollarisation efforts prioritise the development of a digital currency. This initiative is intended to develop a domestic payment system that could be used globally. The initiative advances China’s efforts to create alternatives to U.S.-controlled global economic, financial, trade, and technology networks. The effort complements China’s expansion of its national security economic authorities, including new export controls and sanctions laws.

China and Russia have reduced their dollar use over the past decade, but both countries (in common with most nations) rely heavily on the dollar. China holds significant dollar reserves. The renminbi (RMB), is traded more or less freely in foreign exchange markets: the RMB accounts for 3%-4% of global forex. The limited use of RMBs in cross border transactions constrains China’s broader de-dollarisation efforts. Russia’s rouble is not widely used abroad. Global energy markets (Russia’s main exports) are traditionally denominated in dollars. Over time, however, if de-dollarisation efforts gain traction, there could be implications for the U.S. economy, U.S. sanctions, and U.S. global economic leadership.