The Power Of Choice & Economic Models

Gross Domestic Product (GDP) still dominates economic policy discussions, even though a number of proposed indices reflect wider environmental and social concerns. In this article we ask the question - do any of these reflect the fact that, once people achieve above a basic level of income, they are able to make choices about how they spend their time and money? We argue that cultural, generational and aspirational differences between people lead to very different decisions, and that a useful universal metric may be a chimera. 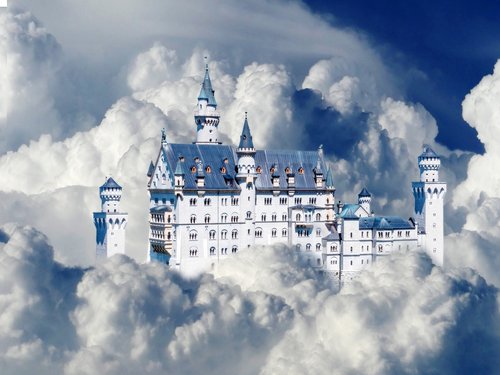 GDP was developed by Simon Kuznets and was not intended to signify well-being. As UN Secretary-General Ban Ki-moon has said: "We need to move beyond gross domestic product as our main measure of progress, and fashion a sustainable development index that puts people first": in remarks to the High-level Delegation of Mayors and Regional Authorities, New York, USA, 23 April 2012.

Equating "money costs" with "value" misleads in many ways. In a speech in 1968 Robert Kennedy complained that measures of output included spending on cigarette advertisements, napalm and the like, while omitting the quality of children’s health and education. Despite efforts to improve such statistics, these problems remain. A dollar spent on financial services or a pricey medical test counts towards GDP whether or not it contributes to human welfare. Social costs such as pollution are omitted. Economists try to take account of such costs in other contexts, for example when assessing the harms caused by climate change. Yet even then, they often focus on how environmental change will affect measurable production and neglect outcomes that cannot easily be set against the measuring rod. Similarly, species loss and forced mass migration impose costs to the psyche that resist financial valuation but are nonetheless important aspects of well-being. 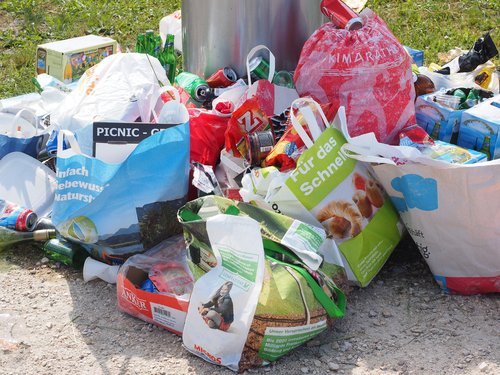 The EC’s “Beyond GDP” initiative has highlighted that GDP does not cover goods and services that cannot, or have not, been assigned value by the statistical authorities - i.e. so-called non-market goods and services. Examples of these are household production, unpaid work such as caring services in the family, entrance-free beach visits, and wildlife viewing. In other words, it does not measure well-being that goes beyond monetary measures. It also does not reveal inequality – the GINI coefficient does this.

Even if we are considering goods and services, price is a poor measure of the value of digital goods and services, which are often paid for by customers giving access to their data. Technological progress promises to create ever more situations in which ethical considerations conflict with narrowly material ones. The question of how to increase well-being in such a world deserves greater attention.

So Gross Domestic Product – based on money as the measure – has become a less reliable measure of national well-being. Other indices are increasingly being used. Can surveying some of the indices proposed and in-use lead to a suggestion of the outlines of a new economic model?

What Other Indices Are There?

The Human Development Index (HDI) is a tool developed by the United Nations to measure and rank countries' levels of social and economic development. Four principal areas of examination are used to rank countries: mean years of schooling, expected years of schooling, life expectancy at birth and gross national income per capita. This index makes it possible to follow changes in development levels over time and to compare the development levels of different countries. As Nobel-Prize winning economist Amartya Sen said : "HDI is people-centered … GDP is commodity-centered" in an interview regarding the 20th anniversary of the Human Development Index, 2010.

The Boston Consulting Group (BCG) has published the Sustainable Economic Development Assessment (SEDA) The SEDA was first published in 2012 with the aim of assessing what policy areas deserve attention to support economic growth and wellbeing simultaneously. The 2018 edition of the study covers 152 countries, and the methodology is based on 3 categories of wellbeing (economics, investments and sustainability), which are collectively covered by 10 dimensions using 40 publicly available indicators. The category of sustainability covers equality, civil society, governance and environment. A wealth-to-well-being coefficient is used to assess how effectively one country’s level of gross national income (GNI) per capita is converted into their given SEDA score. Overall the report shows that well-being has improved in the world over the past decade, and that investing in education and employment can best support well-being in advanced countries. However, the report also highlights that air quality and carbon emissions have worsened in most countries.

Kate Raworth’s doughnut model (see figure 1) has been used to estimate values of “national doughnuts” which aim to reflect the extent to which a country is meeting its people’s essential needs while at the same time ensuring that its use of Earth’s resources remains within its share of the planet’s biophysical boundaries. 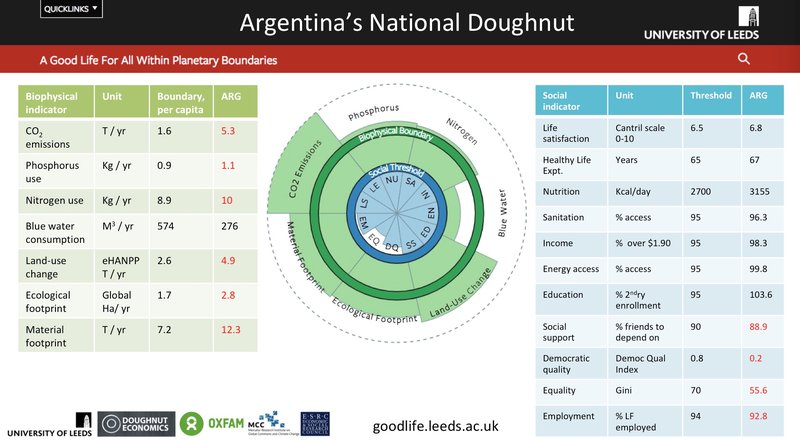 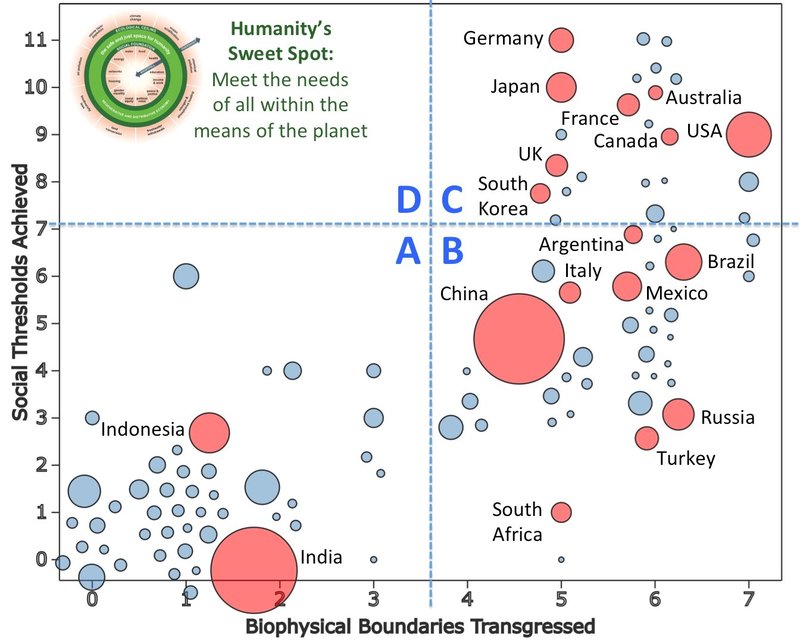 This type of scatter plot is useful in communication – in the graphic above, the G20 countries are in red. The graphic is also useful in informing an answer to the question: "Does more income (social thresholds achieved) correlate with transgression of biophysical boundaries?"

While there is a clear trend, outliers Russia, Turkey and South Africa suggest that some countries damage their biophysical environment without providing wealth or standards of social structure for their citizens. The countries that are better at achieving social thresholds with less transgression of biophysical boundaries (Germany, Japan, UK, South Korea) are all at Level 4 in the UN nomenclature popularised by Hans Rosling. He found that more people are now middle class (levels 3 and 4) than poor, 3 billion globally. Using dental hygiene as a quick indicator (see figure 3).

Figure 3: Dental Hygiene As A Measure Of Development

Figure 2 (above) suggest that middle class people can make choices, and these choices may well diverge from “rational economic man” profiles. For instance:

Economists are at their least useful when a measuring stick should not be used at all. They have been known to calculate, for example, the financial gains from achieving gender equality. But gender equality has an intrinsic value, regardless of its impact on GDP.

What this suggests to us is that, once people are above Level 2 living standard, they – and their governments – are able to exercise choice. This means that attempts to set policies based on GDP will ignore the real concerns of citizens – with their cultural and generational differences. We echo the question raised in the Atlantic Monthly “Why do economics classes barely mention behavioural economics?”, and ask – is work taking place to develop economic models based on a post-industrial view of people? Please?