Where Did All The Americans Workers Go?

We hear from across the Atlantic that restaurants in New York are turning back dinners, factories in the mid-west are operating at below half capacity and in California there are not enough airport workers to unload baggage from aircrafts. As we cannot travel to the US, the question we are asking is where have all the American workers gone? Especially as they have not had Brexit!

It is not often that we pause to praise Boris and his handling of the Pandemic, but at the start of 2020, when he and the Chancellor were faced with the first lockdown and how to support workers, there were a couple of models that we could follow. The Germans, with the Furlough scheme and the US, which later implemented an aggressive scheme of handing out cheques to the vast majority of the country. The former incentivized employers to retain employees and ensure a quick recovery once the pandemic was over, the latter as we see is leading to a spending boom, inflation and rumours of the ‘Great Resignation’. This is not a commentary on comparative support schemes, but more importantly, why UK companies are struggling to get workers for their US businesses.

The US unemployment rate has been declining steadily since 2011-12 and stood around 4.7% in January 2017, when the last president was sworn in. This was a historical low reading for a new president, but wages were not rising for low income earners. In the US, the minimum wage is administered on a state by state basis and is much lower than in the UK/Europe. In terms of real dollars, people at the low end were earning less money than in decades past. Employment levels were increasing, but as a consequence of weak labour laws and flexible working, inequality in the US was increasing. 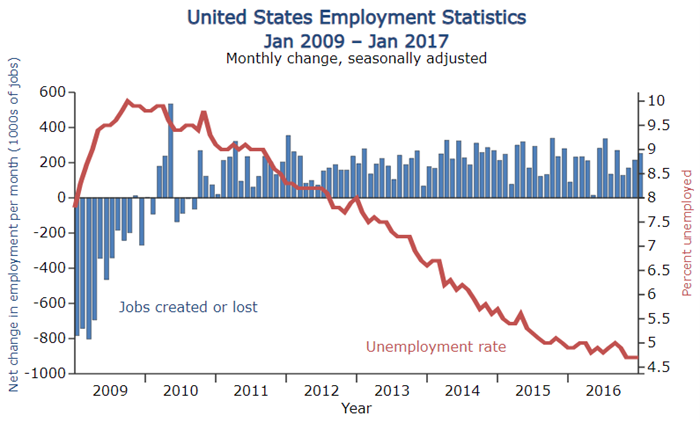 December 2017 brought tax changes that lowered effective taxes on corporations and lower rates for income tax. This had the impact of accelerating hiring and boosted confidence even more lowering unemployment to 3.5% in September 2019 and hovered around that number until Feb 20. Added to this, with the famed wall on the Mexican border, immigration levels into the US declined over this period, further reducing the available labour force. 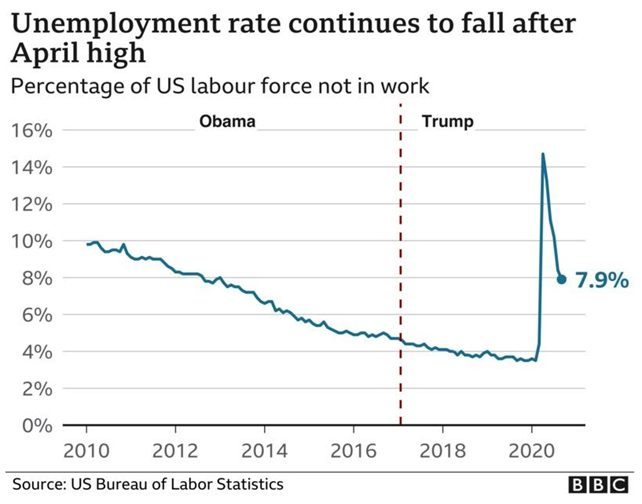 The Position During The Pandemic

Once the Pandemic spread westward from Wuhan, lockdowns in Asia and Europe, were followed by similar restrictions in the US, that were administered on a state by state basis and unemployment peaked at 14.7% in April 2020, but has been gradually declining as businesses have started to open up again, in combination with the roll out of vaccines. But the employment recovery has been much more muted than expected and slower than the UK. 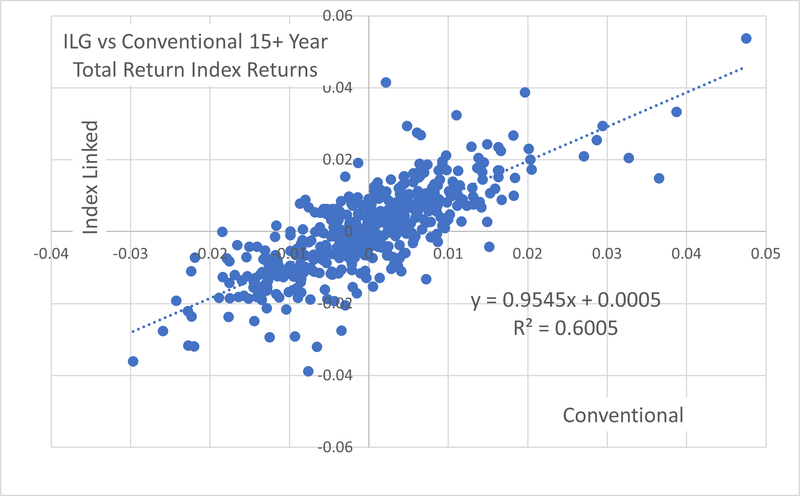 In a country with very flexible labour laws, a programme of wage subsidies and incentives to retain employees would be counter-intuitive and in place of supporting employers, the US Government went direct to its people, with a $2trn stimulus package and whilst not exhaustive, included the following benefits:

If my reading is right, every American was entitled to benefits that would on an annualized basis work out to a salary of around $32k last year and $16k this year, for not working. Simple economics tells you that higher benefits lead to less labor participation. In the UK/Europe, employees were supported to stay in their jobs, whilst in the US it almost stopped making sense to work and for this reason, we are seeing unemployment levels reduce more slowly in the US than here in the UK.

What Is The US Labour Outlook?

It is human nature that when children stop going to school, adults to gyms and employees to work, people get out of the habit of doing so. Truancy rates in schools are up, memberships at gyms is down and there is no reason to believe work will be different. The biggest question is what will happen when the stimulus cash ends, unemployment currently stands at close to 6% and US GDP is currently growing at around 6%. In order to sustain and build a long-term recovery, it will be key for labour participation rates to return to pre-pandemic levels.

We are starting to see encouraging signs in the private sectors of employers providing pay rises, signing on bonuses and other incentives to get back people back into the work force. My sense sitting in London, is that this will happen gradually as the world returns to normal, the obvious side effect of course will be inflation across the board, a problem for another day. In the meantime, with 1.9m Europeans having left the UK as a result of Brexit, and the furlough scheme coming to an end here in September, our problem will be less about getting people back to work and more about having enough workers to fill the jobs to keep the economy growing.